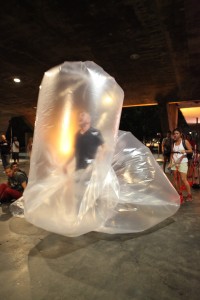 When asked about her perspective on performance, the independent curator Daniela Labra stated with simultaneous confidence and perplexity: “Brazilians are performative. We deal with the body in a libertarian way, but we are also impregnated with moralisms.” The paradox raised by Labra can be identified in almost every aspect of Brazilian culture and social behavior. Nevertheless, her statement also addresses a poignant criticism to the conservatism of art institutions.

Labra has been working as a researcher and curator of performance works since 2004. In 2011 she conceived the Festival Performance Arte Brasil at the Museu de Arte Moderna do Rio de Janeiro–MAM RJ. The six-day festival received a grant from FUNARTE/MinC (The National Foundation for the Arts/Ministry of Culture) in the amount of approximately USD 125, 000. A curatorial team formed by professionals from different regions of the country composed the festival program, which presented the work of more than forty artists and art collectives.